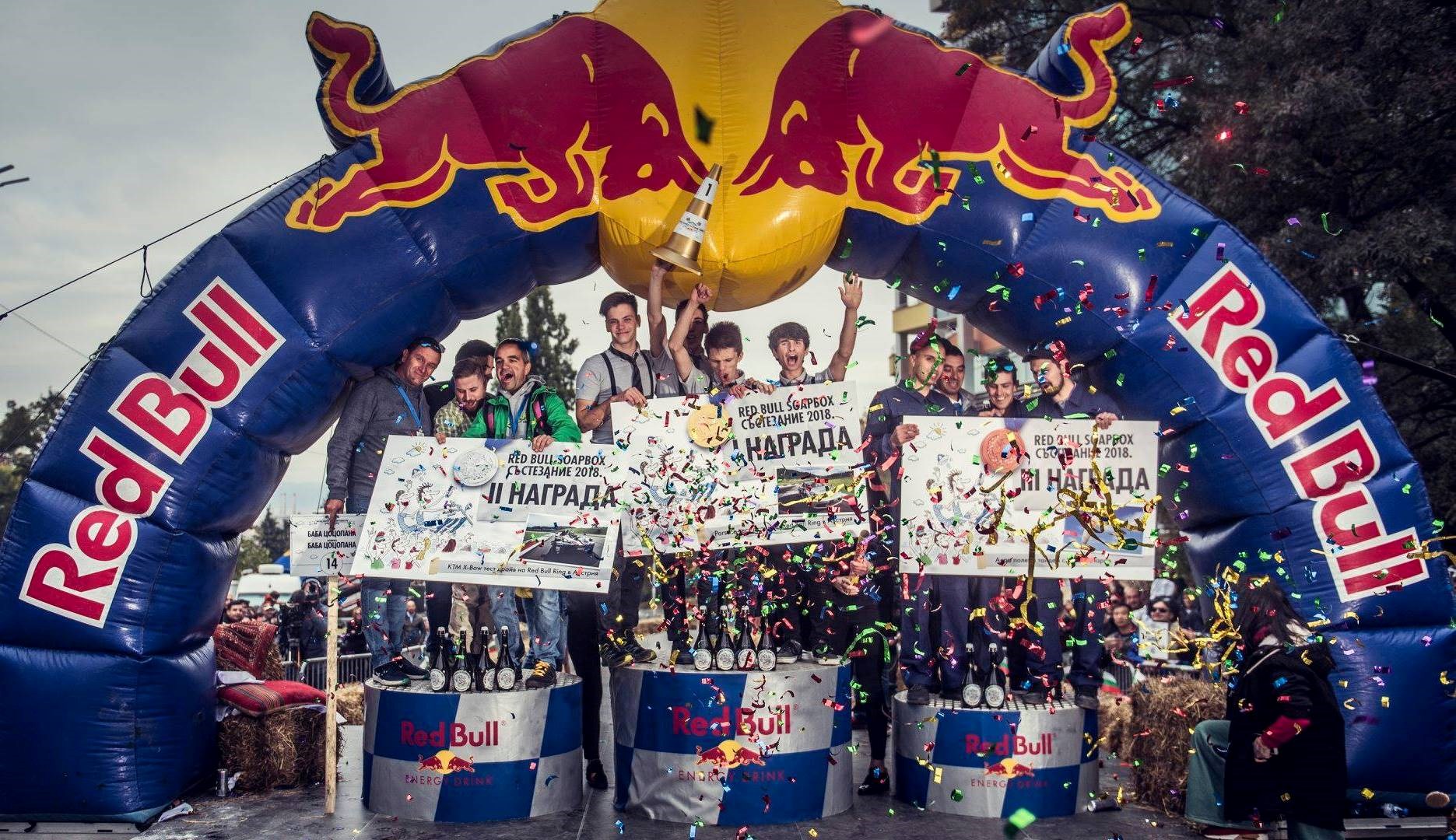 Four ACS seniors ranked first in one of the coolest events to take place in Bulgaria this fall, the Red Bull Soapbox race. Their vehicle is called The Teacher (Госпожата).

Here is what happened, in their own words:

What Is Red Bull Soapbox

Red Bull Soapbox is a unique competition which takes place in dozens of countries worldwide. In this year's edition, in Sofia, 49 teams hand-built their soapbox carts, then raced them down Cherni Vrah Boulevard on September 30, powered by gravity alone.

The captain and pilot Taniel Gulian can totally be a go-it-alone guy if need be. The most experienced engineer on the team, when not dismantling, blow-torching, or 3D printing, you will find him bicycling or carting.

Kaloyan Kolev just might be the team's manager and PR expert. He is attempting to tame the chaos of the project by keeping Excel sheets, organizing work hours, and writing texts like this one. On the side, he's shooting videos, producing music, and solving his problems through Google searching.

Stoil Nikolov initiated the project. A Renaissance man through and through, he is the eye and brains behind the final look of the cart. In his spare time he practices rock climbing and photography, sometimes both at the same time.

Georgi Vichev is the physicist of the team. Forged through many physics competitions, Georgi has taken on one of the most important aspects of the endeavor, the calculations. His teammates know that they are safe in his hands, that nothing will break, and every risk will be calculated.

Howe Did the Idea of The Teacher Come About

The resilience of classroom desks, which survive generations of fidgeting students, scribbles and chewing gum, is a thing to be admired. Therefore we decided to base our cart on the everlasting Bulgarian classroom – so that it can withstand the challenges of the racetrack.

The work process started with the creation of a 3D model and sketches of our idea, as well as consultations with any professional we could find.

The frame is aluminum, to keep it as light as possible. We got the steering system, front suspension, hubs, and brakes from an old ATV. We used modified bicycle tires, because they needed to be thin but able to withstand jumps and veering.

On top of the frame, we put a specially made aluminum desk, because the school desks are too heavy. The chair for it we found tossed on the street. The decorations include books, a purse, pencils, a dnevnik, a ficus, and a trash basket. Our costumes, naturally, were school uniforms.

How We Won Red Bull Soapbox

The first round of the competition was online voting for the ideas. Thanks to the help of friends and fellow students, as well the support of ACS, The Teacher received 813 votes winning second place and a professional video by a Red Bull team. Thanks to the video, on September 28, we got invited to appear on the Na kafe show on Nova Television.

On the day before the race, all teams had to undergo a tech check (80 kg max weight, 180 cm width, 20 cm elevation from the ground). We were among the few that were allowed to go on without having to readjust their designs.

On the day of the race, September 30, the teams went through 3 evaluations: design, presentation, speed. The Teacher impressed the jury with its fun details and expert construction, getting 49 points for design. Our 20-seconds presentation at the start line, where we showed our dance moves to the track from High School Musical, gathered the maximum of 50 points. Taniel's masterful race at 48.92 seconds was crucial, putting us at 6th place in terms of time – enough to guarantee us the top spot.

The competition was extremely tough, and we didn't know till the last if we would manage to place. Being the winners, we shall enjoy an incredible award: Porsche test drive at Red Bull Ring in Spielberg, Austria (when we get our drivers licenses).

We use ‘cookies’ to customize the content and ensure the proper functioning of the website. By continuing to use it, you agree with the use of these technologies. For more information, please read the "Cookies Policy" of the American College of Sofia.
Accept